We have already developed a smart IoT device System ‘Eye’ for vehicles but still keep looking for possible upgrades and updates. Our platform constantly evolves and we want to move it forward even faster. Being deeply involved in the automotive industry, we daily track the IoT news, predictions, and stats from other markets and keep up with the latest technologies and inventions.

Today we are going to share a few of the most important facts and news about the Internet of Things to give a better understanding of the market at large.

According to the stats below, if compared to 2015 spending on Internet of Things worldwide by 2020 will be increased by far. 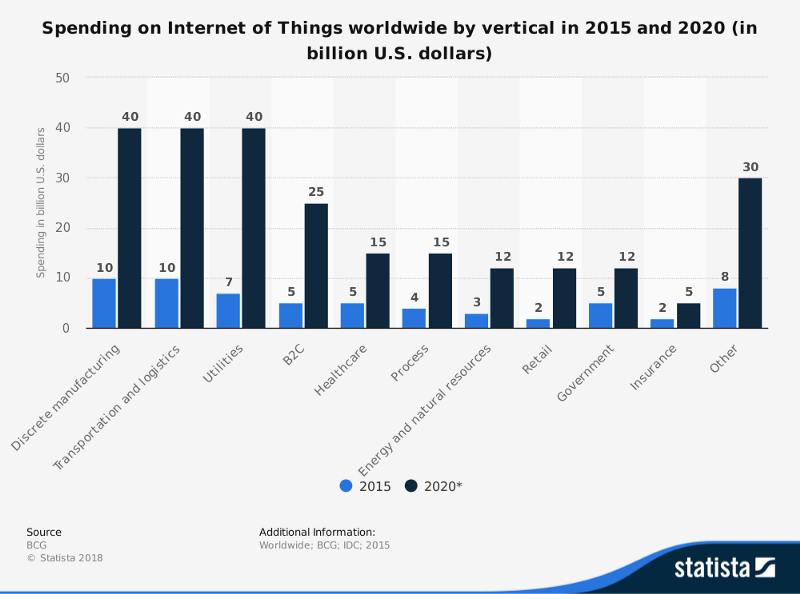 An American worldwide consulting agency McKinsey reports that the market of IoT can reach an annual economic impact of $3.9 trillion to $11.1 trillion by 2025 across different sectors, such as plants, smart cities, retail and rental industry, health and insurance, etc.

Such a tremendous growth in the IoT market can be explained by the increase in cloud platforms adoption and its cost-effective services (up to 35% of the annual cost).

Currently, the United States is the leader in IoT projects for car manufacturing with 54% of projects worldwide, while Europe and Asia Pacific region keep the share of 30% and 12% respectively.

Rolls-Royce uses IoT to increase the fuel efficiency of jet engines, optimize flight paths, and improve maintenance. Attaining a 1% reduction in fuel usage translates to a cost savings of $250,000 per plane, per year.

Royal Dutch Shell realized a $1 million return on an $87,000 investment in a remote IoT-based asset monitoring and maintenance solution that tracks activity across 80 oil fields in West Africa.

A provider of market insights for the Internet of Things, IoT Analytics has found quite a few notable projects based on IoT.

The major players in the automotive IoT market

You may not know that, but the biggest global corporations have been employing IoT for many years. Just to name a few:

At TechCrunch Disrupt, Discoperi will present its IoT device — System ‘Eye’ — for the very first time. Attendees of the show will be the first to see how it works and how it can be integrated into vehicles.

If you plan to visit the conference, don’t forget to meet us there or book a meeting with Alex Bondarenko.

Previous post Win TWO TICKETS to Formula 1 in Japan!
Next post How to stand out at TechCrunch Disrupt